Vincent Happy (Or simply “Mr. Happy” or “Vinny”) is a "Mothman", an awe-inspiring cryptozoological wonder hailing from a long-undocumented prehistoric species that has existed since before the dawn of evolved man. He's also infamous as a reckless masculine alcoholic. He serves as the muscle and transportation for the main trio, and is the tritagonist of Keaton & Jackson.

Initially appearing as a mysterious and menacing creature of unrelenting peril, but is really a wicked, wise-ass goof that could use a drink. A rough, ambitious, mysterious, creepy, tricky, daring, optimistic, stubborn cryptic marvel, and the very face of hedonism, the undocumented rogue adventurer Mr. Happy uses his mastery of flight and his ominous red eyes to take the world for a spin on another day of survival. A spirit that's buck-wild, but often inadvertently risks both his own life and the lives of others.

Vinny hails from a rare, endangered and prehistoric species dubbed by humans as "Mothman". Vinny has watched the evolution of modern man from the very start, and watched them infest the land. Vinny kept away from them as they began to use other species as resources for food, clothing and companions, and has been in "hiding" since. But, because he was tired of stressing out, Vinny cut loose and began to tease the idea of his existence to the world, resulting in blurry photographs and articles written about him. This has also caused him to be scolded by his mothman brethren for risking what's left of their scarce species by stepping into human territory, even though Vinny doesn't really see it as human territory, and Vinny doesn't want to waste his life in worry.

He serves as Keaton and Jackson’s main means of avian transportation, even though he has fun playing dangerous pranks on them, such as dropping them and catching them back. Most of his power comes from pure strength, and Vinny has shown an enjoyment of violence. He's a useful guy, but he also gets rather neglectful, sometimes even downright sinister at times. Much like Jackson, he lacks conventional social skills, but unlike him, Vinny shows very little will to learn any. Mainly due to laziness. All in all, he's a real fun fella.

Mr. Happy has trouble with human authority, as he was never consulted when the laws were made when the apes advanced, though sometimes he’s just being lazy or impatient. He has trouble following rules in general, really. He’s a buckwild guy lacking an indoor voice and sometimes even lacking a conscience, which sometimes gives him away when he's in hiding. He never sees someone by rank, race or gender, as he looks at human life forms as "equally terrible".

Vincent and Jackson are quite the tag team of hyper-capable nonsensical numbskulls, which is balanced by Keaton’s level-headed intelligence and guidance. He's not really above any sleazy or crazy activity. He appears to be in a “fuck it” mentality, but if he truly was, he wouldn’t care as much about the safety of Keaton and Jackson, or even himself. He’s an impulsive guy, but isn’t entirely blind to his own consequences.

The multitude of Vinny's years have slowly conditioned him to be the way he is. Violent, often offensive, hotheaded, and some of these traits got passed down to the impressionable Jackson after they met. Vinny's devil-may-care behavior is often a bother for Keaton, who has to keep the two cryptids in check and make sure they're not getting vulnerable or hurting anybody else. Vinny and Keaton try to set aside their differences, and help each other out on their missions. They make a good team, along with Jackson, when they do.

He has his abrasive tendencies, but he still looks out for Keaton and Jackson in times of crisis, even the ones he inadvertently causes. He would never harm them with any intention, and considers them his brothers from alternative feminine birthing individuals (brothers from another mother). He only brings malice to those he believes had it coming, and doesn't go out of his way to cause harm to bystanders. Jokes maybe, but not harm.

That aside, he doesn't take many things seriously most of the time, he knows he's only another life form among other life forms, and that doesn't stop him from enjoying life (albeit sometimes at the inadvertent expense of others). But he's a mighty powerhouse that is capable of boulder-smashing strength and flight at near supersonic speeds. His developed fear of very little means he's up for just about anything, even if it means certain death. There’s never a dull moment when Vinny’s around. In short: he's accepting of life's bleak qualities, and finds the mass of evolved humans to be a comedic fodder, like watching a cartoon.

His species has an abnormally lengthy life span, averaging to around 1,000 years at least. "Mothmen" have existed since before Humans advanced the Earth planet. The Earth was now dominated by a species that came after, and now all of the sudden, the Mothmen have to take caution with every step, lest they be hunted or experimented with by the suspicions of the new higher life forms. Like say, if bed bugs and cockroaches suddenly infested your home, and have evolved to the state where they could dissect you too, you'd rather not be anywhere near them. That's what humans have become to the mothman species: like an infestation of bed bugs and cockroaches that have gone too far.

For the longest time, the increasingly scarce species of Mothmen had remained undocumented, until a life in constant hiding and caution became too tedious, annoying and kinda pointless for Vinny's insatiable inner being. So, nostalgic for his old, less stressful freedom, he settles to tease the idea of his existence to the world, because it's humorous to him that every time he steps into town, it warrants a news story. Making the best of the bleak, he doesn't lament the fact that he's become a minority, he instead settles to watch the world slowly collapse after the wacky apes took the wheel all those years ago. If humans are gonna up and take over the planet, eat up everything, and initiate wars, then they're gonna have to deal with him too.

He may appear self-serving and greedy to most, but when you've traversed the ever-changing world alone for centuries on centuries, with each generation of various life forms you've known long gone after the next, it develops the mind set to some that everything is often temporary and nothing can really be guaranteed. Whether they like you, or despise you, they eventually are gone, and are eventually forgotten to time, and are left ultimately trivial along the years. But, he's cool with that.

Vinny is the type that believes "It is what it is." and would rather spend his life living instead of wasting it thinking about how he's living. He can either sulk about being so disconnected from everything and everybody else and only ever being seen as an uncouth freak of nature, or take light in the fact that it means nothing matters, that he's basically become numb to the pain of losing anything or anyone because of that happening so often in his long life span, and that a life as a rogue is more fun than a life with no conflict. That if nothing else, he can just live it up until he dies. Guess which route he chose.

Overall, Vinny was given a Batman-like feel to his design. Mr. Happy, being the muscle of the trio, is hefty and well abundant with upper-body strength and has been shown to bend metal and tip over trees with a flick of the wrist. He has glowing red bug-like eyes that are often mistaken for truck lights at a distance, and a wide and radiant grin across his face for most of the time. His entire body is shaped like a lightbulb, as a slight play on “moth”, as moths are attracted to sources of light. 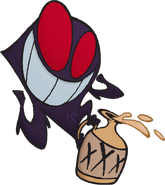 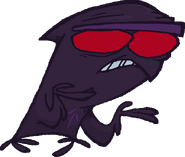 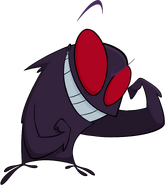 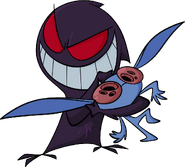 Retrieved from "https://originalcharacters.fandom.com/wiki/Vincent_Happy?oldid=8060"
Community content is available under CC-BY-SA unless otherwise noted.