Single and does not care about relationships

Metal bar she found lying on the ground.

Pallas, codenamed Azure by GLaDOS, is a Portal OC created by Mimosa N. She is the biological daughter of Atlas and P-body and the older sister of the twins Basil and Coryn. She also owns a stuffed ragdoll named Max. She is a major character in the upcoming fanfiction series, Project Marigold and the main protagonist in the first installment.

A few years after the events of "Peer Review", Atlas and P-body grew very close to each other and resulted in Atlas taking P-body as his wife (although they're not "legally" married). They started acting more like humans much to GLaDOS's disappointment. The two robots never expected one the "human" activities to result in the conceiving of a baby. This was when GLaDOS found out that Wheatley put a feature in her test subjects to sexually reproduce.

GLaDOS let the robots keep their child as killing it might turn her test subjects against her, even though she could just disassemble them (which probably wouldn't work either as she considers them as her favorite testing duo).

P-body later had Pallas on February 3rd. She wanted to name her daughter Merope but Atlas already named her Pallas because he thought it was a better name.

At this time, GLaDOS decided to give Atlas and P-body a break and made another testing robot named Coriander.

3 years later, Pallas became the older sister of Basil and Coryn. Pallas was rather neutral towards her brothers, and she and Basil often fought with each other.

When Pallas was around 6, GLaDOS resumed testing for Atlas and P-body. The two robots had to explore Aperture a bit to find at least a safe place for their kids. They eventually stumbled upon the Employee Daycare Center, and Pallas, Basil and Coryn lived there since.

Unbeknownst to them, Mori was tasked to capture Pallas but she never had the chance to catch her when she was a baby. When Basil and Coryn were born, she then decided to capture them too.

Sometime later, when Pallas was sleeping, Basil convinced Coryn to go outside of the center and so they did, but were captured by Mori and a couple of mannequins.

With no security cameras around the area, no one knew why the twins disappeared and were presumed dead.

Despite having neutral thoughts on her brothers, Pallas loved them and was just as devastated as her parents.

She is also quite loyal to her family, and won't back down in a fight.

Pallas loves playing with her family. She often played quite rough and would often wrestle with Basil, who was equally as reckless as her (but a little more naive and stupid). She also did the same with Coryn, but he never participated in fights and instead would simply cry for his mother. Pallas often calls GLaDOS "Grandma" just to anger her, even though she is not a biological family member.

Pallas looks very similar to her mother. Although she is shorter and a little more stout. She is also blue and has little markings; which are just light blue rings on her wrists.

On her frame, she also has her father's shoulders and an antenna is placed on the right side of her back.

Pallas was created sometime in Spring of 2020. Her concept could be dated back to February of 2020 but the earliest known evidence of her was in a YouTube comment in May 3rd, 2020. Her backstory has been changed multiple times.

She was made as a major character in an untitled Alpha and Omega/Portal crossover trollfic that starred a wolf/demon/cat/angel/fox/robot hybrid named Melody. Mimosa N hardly remembers what this trollfic was supposed to be about as it was never written down.

Pallas was also meant to be a major character in The Adventures of Blue and Siskin (which was called "Stray" at the time. Keep in mind Trupan Laboratories wasn't even a base for Metalclaws or anything in this draft. The facility itself didn't even have a name.) who was turned into a cat and ended up in Cattus, along with a scrapped character who was meant to be her little brother at the time (got replaced by Coryn). His name at the time was Hermes and was then changed to Bimbo.

Her backstory at the time was that GLaDOS put Pallas into a virtual world where she was in a maze and was hunted down by Melody the cat mutant, who was really just P-body trying to take her daughter out of the maze. When Pallas was transported to Cattus and finds Melody in Trupan Laboratories, she instantly knows how to take her down. At the time, feline Pallas also gave her and her brother the aliases Tamarack and Tamarisk.

When TAOBAS included Metalclaws and some characters from TCIAL, she was still a major character in the series, but in this draft, Metalclaws was considered some kind of winged cat goddess with antlers who could manipulate dimensions. Mimosa N doesn't remember much about this draft either.

During late November of 2020, Mimosa N then removed Pallas completely from the Cattus universe and turned her little brother into a cat and gave him to a family member, due to his robot form looking similar to someone else's OC.

Mimosa N decided to make Pallas a happier character with a normal life, with an imaginary friend named Max. Although the story before she was born wasn't exactly pleasant either.

She was also going to be the protagonist in another story where a bunch of dimensions and universe crash together due to another character finding the secret in unlocking dimensions. This story has then been scrapped and the synopsis was then used for Journey to Nowhereland.

When Coryn was made (March 12, 2021), Mimosa gradually came up with the idea of Project Marigold over the months. As of now, the fanfiction is currently slowly being planned out.

Pallas and ??? with Oliver and Mumble in the Long Tails territory.

Pallas at the bottom left of "OCs of 2020". This is also the first drawing of Pallas as a robot. 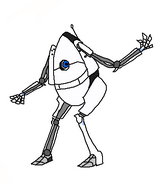 Another drawing of Pallas as a robot. 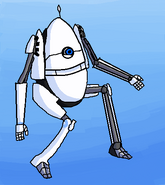 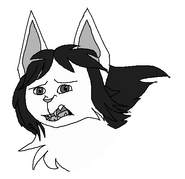 Mimosa doesn't remember why she drew this.

Pallas on the Portal Fanon Wiki