Lexi is an original character of SaintDmac, and the official mascot of his Youtube let's play channel and Steam group.

She is a female Pyro, a mercenary class from the famous 2007 multiplayer shooter Team Fortress 2.

She is a century-year-old succubus who's been drawn and portrayed throughout the years by dozens of famous artists, including RayDraca, acstlu, and CuteC3. She is typically associated with Nikki and Nicky, another pair of cute femme pyros who are in reality, Lexi's devil-and-angel dolls inexplicably blessed with human bodies and thought.

Lexi is a fairly pale, fit, and attractive female, physically 21 years and never aging due to her supernatural roots. Her face is always obscured by a gas-mask and she has been portrayed wearing a variety of clothes, from witch's outfits to astronaut costumes. However, her default attire, as a Pyro, is the standard latex jumpsuit (hers is a trademark purple), black gas-mask, knee-high boots, elbow-high gloves, and harness whilst on the field, but underneath, serving as her casual clothing, is her famous Mega Milk attire (white T-shirt with purple sleeves, matching striped arm-warmers and stockings). Staying true to her succubus nature, she is always seen with black devil horns gouging out of her gas-mask, one of the horns sometimes adorned with a small purple bow, and a purple devil tail.

Despite being a succubus, Lexi is incredibly shy, benevolent, and modest. Even though she is a mercenary, she avoids combat at all costs and will only harm someone if it's necessary. In her free-time, she is a typical gamer-girl, regularly gaming and collecting merchandise. 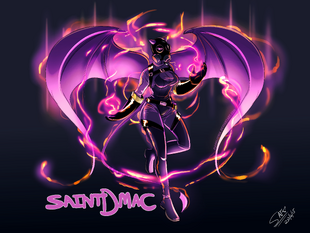 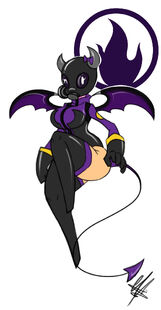 Artist: Christomwow
Add a photo to this gallery
Retrieved from "https://originalcharacters.fandom.com/wiki/Lexi?oldid=9299"
Community content is available under CC-BY-SA unless otherwise noted.