Beauty is the Beast

Beauty is the Beast is a reimagining of the Beauty and the Beast fairy tale.

The story consists out of 8 short chapters and were written by VampireMeerkat in Dutch. That said, its original title is "Schoonheid is het Beest". It was uploaded on July 6, 2018 on a Dutch blogging website, with a series of simple images accompanying it.

The story has humor and 4th wall breaking in it, but a classic tragic ending.

The story begins with narrating the childhood of a physically handicapped woman who has a light form of werewolf syndrome, named Beauty. After years of being bullied by the villagers and her own sisters, she locked herself up and became a bitter person. Her relationship with her sisters did not improve after the death of their father. They married two random men, so they again had someone to take care of them, and left the undesirable Beauty with the absence of money flow.

On their wedding party, a young boy named Gaston gets coaxed by his friends to beg Beauty to hand over certain private possessions of the loved sisters. Gaston tries to combine their request with his own interest for the father's expensive coats, but feels guilty for bothering her with this, despite succeeding in getting the items for his friends. Gaston can't get over his behaviour and returns to offer Beauty his services as her grocery boy. During this period the two become good friends and Gaston develops romantic feelings for her.

Because they both feel not to belong in the village, Gaston suggests they should leave and find a better home. They manage to build their own in a deserted area, but a hunter finds Beauty and thinks she's a sasquatch monster. When he realizes Gaston fancies and cares for her, he and the residents of a nearby village kill him. The story ends hinting that they're coming for Beauty next.

Beauty is a tall woman with a dented face, monobrow, chipped teeth, long messy brown hair, and increased body hair. She's presumably 23 years old.
The village she was born in tolerates her presence, but they'd rather not see her. Beauty started out a normal child, but became a grumpy woman who distrusts everyone she meets after her sisters had kicked her to the curb.

She falls in love with her late-than-never friend, Gaston, but has trouble proclaiming her love or answering to his signs of affection because of her lack of social skills. She feels regretful when he dies without having gotten a kiss from her and allows for the angry townspeople to get her next.

Gaston is a dark-skinned boy with bright green eyes and black, wavy hair in a ponytail. He's 17 years old when he meets the older Beauty for the first time.

He's her complete opposite in the sense he's kind, physically attractive, and cares what people think about him. The latter makes it easy for others to exploit him, though it's a character flaw he loses when he starts hanging out with Beauty.

They become good friends and becomes enamoured by her during their first year of togetherness. He's patient, though yearns for Beauty's touch and tries to make this clear to her. He ended up getting killed before the two could become anything official.

It was revealed that the entirety of his family worked in a medical field, possibly explaining why Gaston doesn't see her as a monster or a cursed woman.

Beauty's father was a hard-working merchant with little time for his daughters, but someone Beauty was fond of. He loved all his daughters equally and wished for them to get along. He was killed by raiders during one of his business travels.

Beauty's sisters are considered the most beautiful girls in town and have been pursued by many boys over the course of their life. The story notes that they and their fans only care about their looks, as the men the two sisters randomly chose for marriage don't even know the date of their birthday.

Beauty's sisters used to be less self-involved, and protected Beauty from bullies. When puberty hit and they started caring about their image, they no longer wanted their unpopular sister to follow them around.

Gaston's friends are a large group of teenage boys who have a huge crush on Beauty's sisters, much like every other boy in the village.

Because they begged Gaston to get the girls' underwear from Beauty, it's implied they're juvenile and like to exploit their "cute" friend to do things that normally wouldn't fly.
When Gaston befriends Beauty, he rarely hangs out with them anymore.

The huntsman is an old hunter who lives in the village Beauty and Gaston chose to live nearby.

He happens to come across their cottage and sees Beauty, confusing her for an hideous animal that possesses a worrisome level of human intelligence. When he finds out Gaston is living with and caring for Beauty, he riles up the other townspeople to ambush and kill him for being Beauty's lover and servant. They later come back for her. 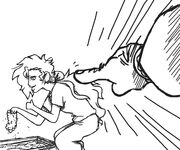 Stop taking all my socks. 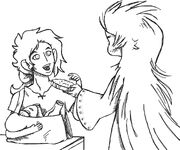 Sharing the lunch you brought me. 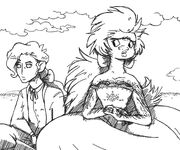 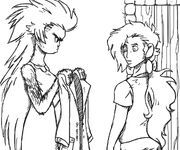 What I give you, you may keep. 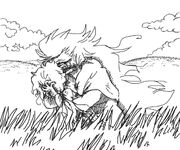