I am an evil overlord from the future and what is this?!Arthur

He isn't a good villain, but learns from his mistakes and moves closer every day to becoming the evil overlord he desires to be.

Arthur is the son of the half-elf Rachael Cypher and fairy Regulus Kjell, and was born after the Nuclear Winter; the result of World War III in Nashville, Tennessee. He was brought to a private school/college by the headmaster of the orphanage he was raised in.

Little is known about him, except that he's always wanted to be a villain, and -despite his appearance- is incredibly intelligent. He's inherited his mother's insanity and knack for scientific construction, most notably, doom weapons.
Arthur wishes to become the master of the parallel Earth, as he believes the current masters to be incompetent.

Arthur suffers from DID and has three personalities.

He can be sweet and complacent, with a hate for violence (referred to as "Squishy"), a hyperactive, cartoony villain with a taste for peanut butter (the default), and a dark evil that loves violence and arson (referred to as "Polaris"). There's no telling which will be in control at a given moment, and he's constantly changing between them in a matter of seconds.
These different sides, however, can be purposely drawn out depending on what is said or done to Arthur.

When Worlds Collide by Powerman 5000,

Theme to a Fake Revolution by Powerman 5000,

Flash Back Radio by Axxis,

Recipe for Hate.....Warhorse by Megadeth,

Evil Has a Name by Hail the Villain,

Blackout by Hail the Villain,

Toxicity by System of a Down, 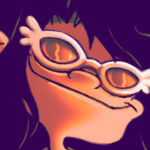 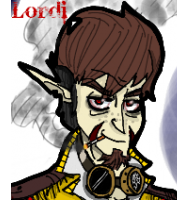